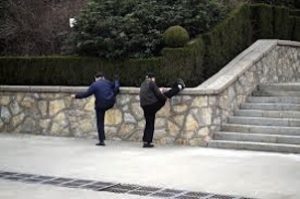 For anyone who is considering a hip replacement, it is likely that you’ll be reading around the subject and making sure that you’re up to speed on what to expect from the procedure.

There has been a flurry of news recently about the speed and efficiency of anterior hip replacements, with stories about patients having this operation and being discharged later that same day, but this has some consultants concerned.

What is an anterior hip replacement?

This type of hip replacement is designed to cause minimal damage to the tissue and muscle that surrounds your hip joint. It is a very different approach to total hip replacements, requiring surgeons to learn a different technique.

Surgeons work by making a small incision on the front of your hip (rather than the back or side, which is more typically the case with total hip replacements).

Back to a more effective approach

Joint replacement specialist Simon Bridle recognises that hip replacement technologies have progressed significantly over time, although it is his belief and recommendation that approaching the joint from the posterior (back of the joint) is the safest and most effective means of undertaking this operation.

Although the posterior approach requires an incision through the gluteus maximus muscle, it requires the fibres to be separated, not actually cut. A small group of muscles called the short rotators are cut off the back of the hip and repaired back at the end.

There is no evidence that this approach results in any detectable muscle weakness in the long term. Mr Bridle believes that the anterior approach does not provide tangible advantages in terms of limiting the amount of pain or discomfort experienced by the patient, or to the overall effectiveness of the operation.

With modern anaesthetic techniques and pain relief many patients are leaving hospital in 2 or 3 days after a posterior approach, with rapid rehabilitation, so the short term potential benefits of an anterior approach are probably overplayed, with no evidence of any long term benefit at all.

Concerns with the anterior approach

In fact, the anterior approach raises some significant concerns for surgeons such as Mr Bridle. By making the incision at the front it is much closer to the lateral cutaneous femoral nerve (this runs along the front of the hip and supplies the skin on the side of the thigh).

In some cases patients have reported feeling numb in the top of their thighs following an anterior hip replacement, as a result of damage to this nerve and this can be very troublesome. The anterior approach is more difficult, increasing the risk of other surgical problems. It has been shown that it takes surgeons a long time to learn how to do it well.

Special implants have been developed to make it easier, but these often have no track record, so we don’t know how well they will do. All these issues are avoided with a conventional posterior approach.

As with any medical professional, surgeons will select and recommend the treatments that they believe are best suited to their patients’ needs and requirements. Although a shorter stay in hospital – which an anterior hip replacement may offer – may be attractive, when the overall risks and benefits are weighed up, it does not fare as favourably.

Mr Bridle believes that the posterior approach offers a safer and more reliable technique for his patients.

Maps were disabled by the visitor on this site.
Scroll to top